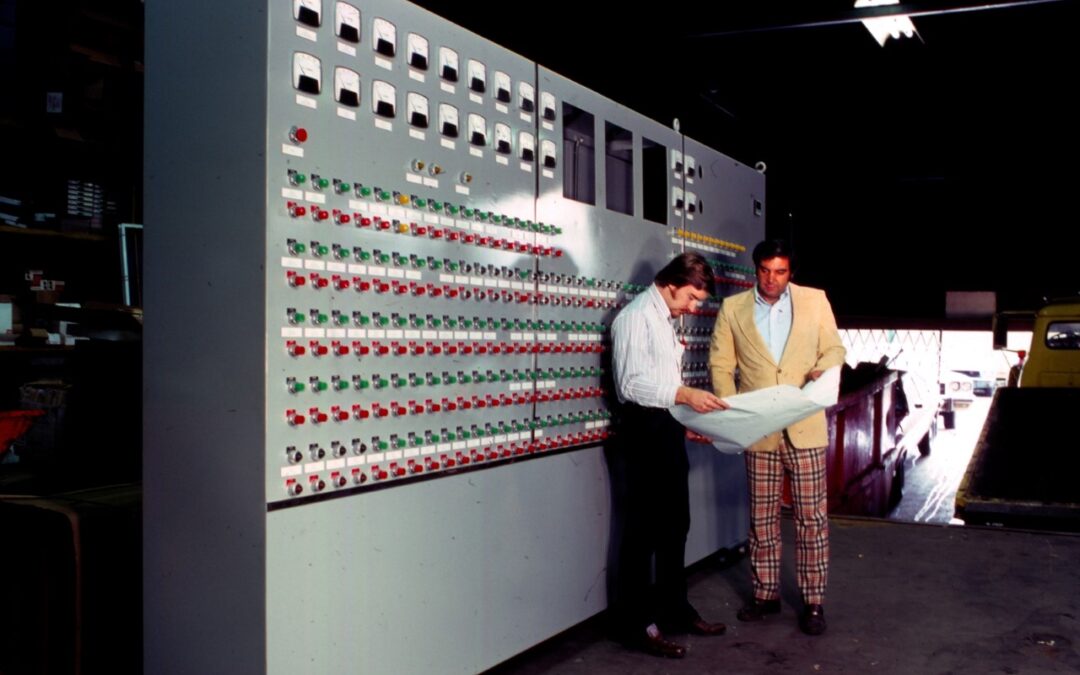 The 1970s proved to be an eventful decade for Simplex.

By 1971, the company was in need of more space, and moved to a 2,500 sq. ft. building in La Grange, Illinois. By 1973, with continued growth, another move was soon in order and Simplex relocated to 1235 S. Campbell St., in Chicago. At nearly 30,000 sq. ft., this new location was significantly larger than the La Grange facility.

Simplex occupied just half of the Campbell Street facility. The other half was occupied by the newly established Industrial Enclosure Corporation (IEC) – a division of Simplex dedicated to manufacturing custom, modified, and standard panel enclosures and cabinets. The two shops were separated by a fire wall and a fire door served as a pass through.

In 1974, John transferred from the Simplex division to work for IEC.* In early 1977, IEC moved to a new location in Aurora, while Simplex stayed in Chicago – moving to Berkley, Illinois a few years later.

The decade of big hair and new wave music proved to be no less eventful for Simplex than did the 70s.

Gordon Merry, Simplex’s current General Manager, has worked for Simplex since 1983 and witnessed first-hand this period of growth.

Initially brought on as a panel builder, Gordon was able to draw on his prior Army experience and also learned on the job. To further advance his knowledge, he later studied electrical technology at Moraine Valley Community College. By 1984, he was overseeing quality control at Simplex – a role he performed for about eight years before transitioning to project management.

The first project Gordon worked on was Job # 3000 (as of this writing, Simplex is on Job # 14315) which consisted of wiring 101 control panels for heat tracing systems made by Raychem.

Other customers Gordon worked with in the 80s included Urschel Laboratories (manufacturer of food cutting machinery – and still a customer today), Nestle, ComEd, and NGPL (natural gas pipelines). There was also a memorable project making panels for a new steel mill being built in Thailand.

In 1984, John Palmer and his brother, Rich, purchased the IEC division from Julius. That same year, Barrett Gleixner purchased Simplex – beginning an era of new leadership at the company. Barrett had been working for Simplex in various capacities since the mid-70s. In fact, it was Barrett who had hired Gordon.

In the summer of 1986, Barrett moved the company from Berkley to Bensenville, IL.

Simplex was a source of great pride for Barrett. He built Simplex on the principles of integrity, and trust and loyalty to his customers, suppliers, and employees.

Barrett kept his children, and even grandchildren involved in the business. His daughter Lianne recalled that she spent the summer after her 8th grade year soldering in the shop. During her high school years, she helped in the front office.

Once her children were born, Lianne concentrated on raising her family. When her children were older, Barrett asked her to work a few hours a week to help with cost accounting (a new business practice for Simplex at the time). Later, he asked her to help cover for the front office manager. Eventually, when the manager left the company, he asked Lianne to take over the position.

In 2008, Barrett sold the business to Lianne and her husband, Kurt Sundberg. Kurt was a driving force in the decision to buy the company. He had a successful career working in IT for Arthur Andersen and McDonald’s Corporation, but his ultimate goal was to own his own business.

Barrett had been looking to retire and he suggested to Kurt that perhaps he should consider purchasing Simplex.

Kurt admits he was a bit surprised by the offer. Having worked in the world of information systems, he did not have a background in electrical technology or manufacturing. The two men agreed, however, that Kurt should come to work at Simplex and “learn the business” before making a final decision. Kurt joined Simplex in May of 2007.

By the end of 2008, the transition was complete.

To the present and beyond

Lianne grew up in Simplex with first-hand experience of the company’s inner workings, while Kurt brought his prior business management experience to the table. Together, the duo has established Simplex as a premium supplier to customers across industry lines, while continuing Barrett’s vision of a highly principled approach to business.

Simplex continues to be a leader in the control panel industry, but never rests on its laurels. Kurt and Lianne are committed to continuous improvement.

Historically, panel building has been a highly manual process. Using automation to improve efficiency is thus a key priority for Kurt and Lianne. They are not looking for automation to replace workers, but rather to enhance productivity and accuracy.

The recent move to a newer and larger facility in Elmhurst (coinciding with the company’s 50th anniversary) has spurred the ability to integrate automated processes and new technology. Currently, Simplex is testing how to integrate a “Personal Wiring Assistant” (just one of five such machines in the U.S.) into production. By automating repetitive wiring processes, throughput can be increased as much as forty percent while allowing technicians to focus on detail work.

A “Personal Wiring Assistant” is like a sous chef in a restaurant kitchen. The sous chef does the prep work (slicing, dicing, chopping and such) so the chef can cook and prepare the meal.

Simplex is also investigating how to integrate other types of equipment. For example, instead of using hand tools to cut holes in stainless steel enclosures, they are currently working with one of their key suppliers to integrate a machine that can do this quickly and with great accuracy.

Enhancing internal business processes, human resource management, data management, and integration of systems – all with the goal of improving efficiency – is also a priority for Kurt and Lianne. These efforts have helped to position Simplex for Industry 4.0 – the ongoing automation of traditional manufacturing and industrial practices, using modern smart technology.

Kurt, Lianne and the entire Simplex team are also passionate about supporting American manufacturing. This includes efforts to educate stakeholders and policy makers about manufacturing and trade issues.

Doing their part to encourage American manufacturing, Simplex is affiliated with The Coalition for a Prosperous America – a nonprofit organization working at the intersection of trade, jobs, tax policy, and economic growth. The Coalition is a bipartisan collection of farmers and ranchers, manufacturers, and labor groups working for a national strategy to eliminate the trade deficit, create good paying jobs, and deliver shared prosperity to America.

From its humble beginnings in a ramshackle bleach factory in Cicero over 50 years ago, to its sparkling new facility in Elmhurst, Simplex has maintained a singular focus on providing high­-quality custom electrical and pneumatic control panels at a fair price.

The next 50 years will undoubtedly see many changes at Simplex and in the control panel industry. But some things – the dedication to customers, the concern for employees, and the community focus – will never change.

* Industrial Enclosures Corporation, led by John Palmer, President, is still based in Aurora.

Manufacturers Simplex System Controls’ Blog is looking to hear from you.

Be next to share your story supporting innovation, quality, or integrity.

If you are an engineer, engineering firm, one of our vendors, or manufacturer and want to collaborate on an article or have an industry story to share, contact our sales and marketing team. Also, reach out if you have strong opinions on this article.